The available tea crop figures for the first ten months period are appended below (in MT).

Total average shows a positive variance in USD terms when compared to the same period of 2021.

The tea export figures for the first ten months are listed below (in MT).

It would be relevant to note in comparing the December 2019 production figure of 21.89 million kgs, December 2021 shows a marginal decrease of 1.48 million kgs.

Interestingly, compared to 300.12 million kgs of January-December 2019, cumulative production of 2021 shows a marginal decrease of 0.78 million kgs. On a cumulative basis, High and Medium elevations have shown gains with the Low Growns showing a decrease by 6.67 million kgs over the corresponding period of 2019.

The available tea crop figures for the twelve months (January to December 2021) period are appended below (in MT).

Main categories of Bulk Tea and Tea Bags have shown an increase, whilst Packeted Tea has shown a decrease when compared to the corresponding period of 2020.

All main categories of exports (Bulk Tea, Tea Bags and Packeted Tea) have shown an increase compared to the corresponding period of 2020.

FOB value of Rs. 920.76 records an increase of Rs. 54.06 compared to Rs. 866.70 of January-December 2020, thus recording the highest ever FOB value surpassing the previous best which was realised during the corresponding period of 2020

Total Rupee FOB value has increased considerably in 2021, although in USD terms it reflects a marginal decrease.

Tea in Bulk and Packeted Tea FOB values show a marginal negative variance in USD terms, whilst Tea Bags have shown a healthy increase when compared to the corresponding period of 2020.

Iraq has emerged as the No. 1 major importer of Ceylon Tea following an increase of 27% YoY in January-December 2021. Turkey has moved down to the No. 2 position with a decline in imports (23.5% YoY) followed by Russia, which has also declined (7.6% YoY). The U.A.E. has moved up to the 4th position having increased imports significantly (167% YoY). Iran, which has moved down by a position to the 5th shows a marginal gain (4.7% YoY) in imports during January-December 2021. Other notable importers are China, Libya, Azerbaijan Chile and Syria. Meanwhile, destinations such as Chile, Syria and Saudi Arabia have recorded a decrease in imports during the period under review. It is noteworthy that imports to Libya and Japan have increased significantly YoY by 58% and 17% respectively.

The tea export figures for the twelve months (January to December 2021) are listed below (in MT).

In projecting a possible market scenario, the following needs due consideration. Predicting the market outlook for Ceylon Tea for the year 2022 at this juncture amidst much uncertainty seems a difficult task. Nevertheless, we have analysed the supply and demand situations that exist, and projected based on the likely market scenarios and the recent developments in importer countries.

In analysing the supply situation, it would be relevant to segregate the Orthodox and CTC tea production. 2020 Ceylon Tea production of 278.8 M/Kgs records the lowest since1997. 2021 has shown a welcome recovery primarily following favourable weather conditions, which in all probability is unlikely to be maintained in 2022. Therefore, Kenyan tea production will play a significant role when assessing the total global supply situation. Perhaps another factor that needs due consideration as we have regularly highlighted is the growing demand for tea in producer countries, which has left lesser exportable volumes. 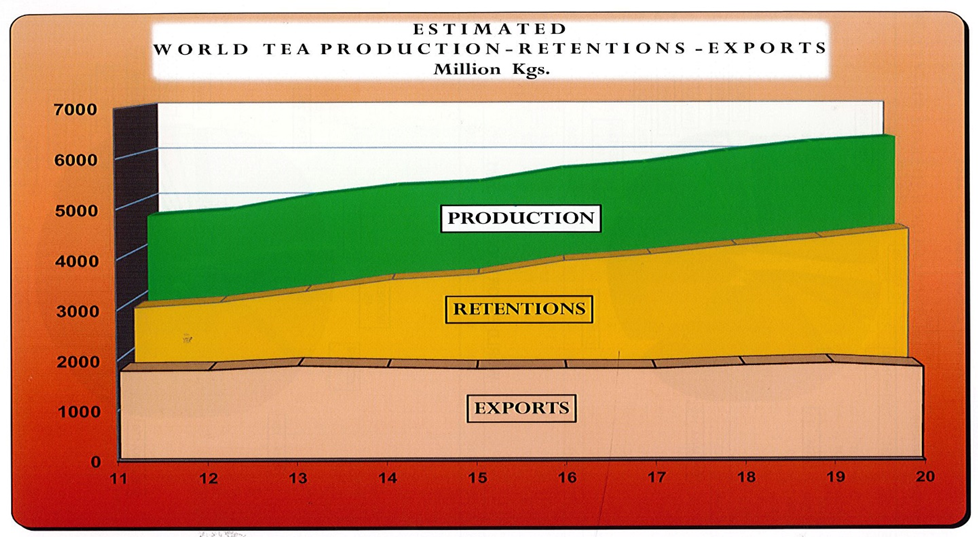 India with its aged plantations show little promise in growth when reviewing data over a period of time. On the other hand, Kenya and the African Region, in general, have shown steady growth in production over the past several years recording a historical 569 M/Kgs in 2020. Although 2021 records a decline on its historical performance in 2020, still shows a growth of approximately 15% in comparing a 5-year average.

Production prospects for 2022 are fairly firm and global tea production may revert to approximately 2% growth. Sri Lanka may be an exception owing to the withdrawal of chemical fertiliser in and around mid-2021, and its ill effects which are likely to take its toll in Q1 of 2022. Since the Government has recently reversed the ban on chemical fertiliser some degree of recovery is anticipated commencing Q2 of 2022, subject to extreme weather conditions not being a reality. However, ageing tea bushes and low productivity levels continue to be a downside.

The market deficit expanded in 2020 as production fell significantly in most producer countries largely due to the Covid-19 pandemic and perhaps to a lesser extent due to climatic conditions.

In 2021, both production and consumption would record a growth with perhaps production increasing more rapidly. Therefore, the market deficit is likely to have narrowed in comparison to end 2020.

Tea consumption is likely to be dominated by Asian consumers, particularly China and India. China, in particular, has been an important market for Ceylon Tea in recent times. Analysts predict that out of home consumption in China is likely to recover in the coming year helping to drive stronger growth in overall tea consumption. Similarly, consumption in India too is likely to show further growth on 2021 data which remained weak with the closures amidst surging Covid-19 cases. The Indian market would have significant potential from its sheer size and India’s average per head consumption.

The United States could be singled out as a fast-growing market, particularly for instant tea and the iced tea segments. Interestingly, imports from Sri Lanka to the United States too have shown useful growth in recent years.

As highlighted previously in the report, Colombo auction prices have shown a significant appreciation in the 4th quarter vis-à-vis Q3 – a combination of factors triggering improved demand, lower volumes, better quality and in anticipation of the unusually lower volumes in the forthcoming quarter of 2022.

Other factors that are likely to impact on prices:

These factors would enable us to predict stronger rupee tea prices for the first half in 2022, in general and Q1 in particular. Market demand for teas thereafter would greatly depend on how the global tea industry would progress during the first half. However, as we have periodically highlighted, market demand for good quality teas will continue to command a premium consistently throughout the year as it is envisaged that there is a dearth of good quality teas.

Amidst this optimistic outlook for tea prices, the industry continues to be challenged with ‘climate change’ and constant wage increases, more so in the current context of high inflation, which would continue to undermine the competitiveness due to the higher average production cost compared to other larger producer/exporter countries.

In our view, the industry as a matter of urgency needs to adopt and mitigate the adverse effects of ‘climate change.’ Rehabilitating and improving the water retention capacity of the soil should be a priority followed by a systematic in-filling programme carried out in the short term. In the medium term, a structured re-planting programme should be pursued in a manner in which a high degree of mechanisation can be achieved in agricultural practices, particularly the harvesting function. Therefore, the global competitiveness of ‘Ceylon Tea’ in the short to medium term will depend on how quickly the industry addresses these vital issues.